Post-Exhibit Notes and Next Steps (December 2018) 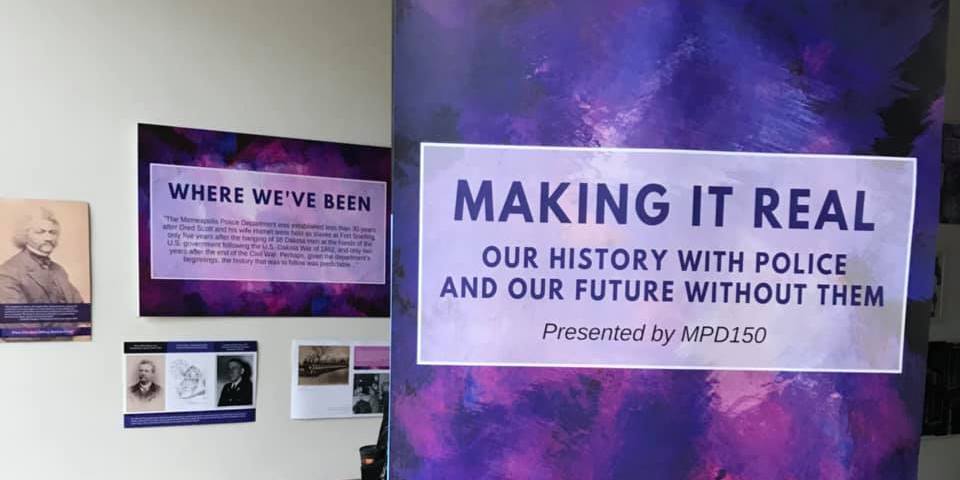 NOTE: This post is from 2018, but we’re leaving it up here both as a record of that time, and because many of the organizations listed below are still active, and still worth looking into for people who want to get involved.

For three weeks, the “Making It Real: Our History with Police and Our Future Without Them” exhibit filled the walls of North Minneapolis’ New Rules space. The exhibit featured work from local artists commissioned to bring MPD150’s 2017 report, “Enough is Enough: A 150-Year Performance Review of the Minneapolis Police Department” to life, creating a space in which people could both walk through representations of the past while also imagining what the future might hold.

The exhibit kicked off with a standing-room only opening (featuring a panel discussion with Devika Ghai, D.A. Bullock, Roxxanne O’Brien, and moderator Juliana Hu Pegues), which was followed by an open mic featuring work responding to the promise and possibility of a police-free future (hosted by Tish Jones and SEE MORE PERSPECTIVE). On the final day of the exhibit, community members came together to have a conversation about what comes next. What resources do we already have? What work is already being done? What work remains?

What follows are the notes from that conversation, along with some links and resources for people looking to get involved and continue this vital work.

What We Have: Organizations and Resources

At the closing conversation, members of various MN-based campaigns, activist organizations, and collectives shared some of what they’re working on. Of course, this only represents groups who were able to show up to this space and talk about what they’re working on (plus a few shout outs). But hopefully it can be a good starting point for people looking to get involved.

In terms of more general “resources,” we’d definitely encourage people to check out the list of readings, links, and resources here.

What We Need: Next Steps and Beyond

For the next part of the conversation, we opened it up for people to talk about what they’d like to see. Our community is full of amazing resources and organizations doing vital work, but are there areas in which something is missing? Or potential projects people could take on? Here’s what we discussed:

There’s always more, but those are the main things that our conversation touched on. Some of the groups in the previous section are already working on some of the points in this one; other points may need people to start organizing around. But nothing here is utopian, science-fiction stuff. These are practical, realistic things that our community can build toward. Thank you for being part of that.

THANK YOU to all of the artists, sponsors, participants, and community members who made this possible.