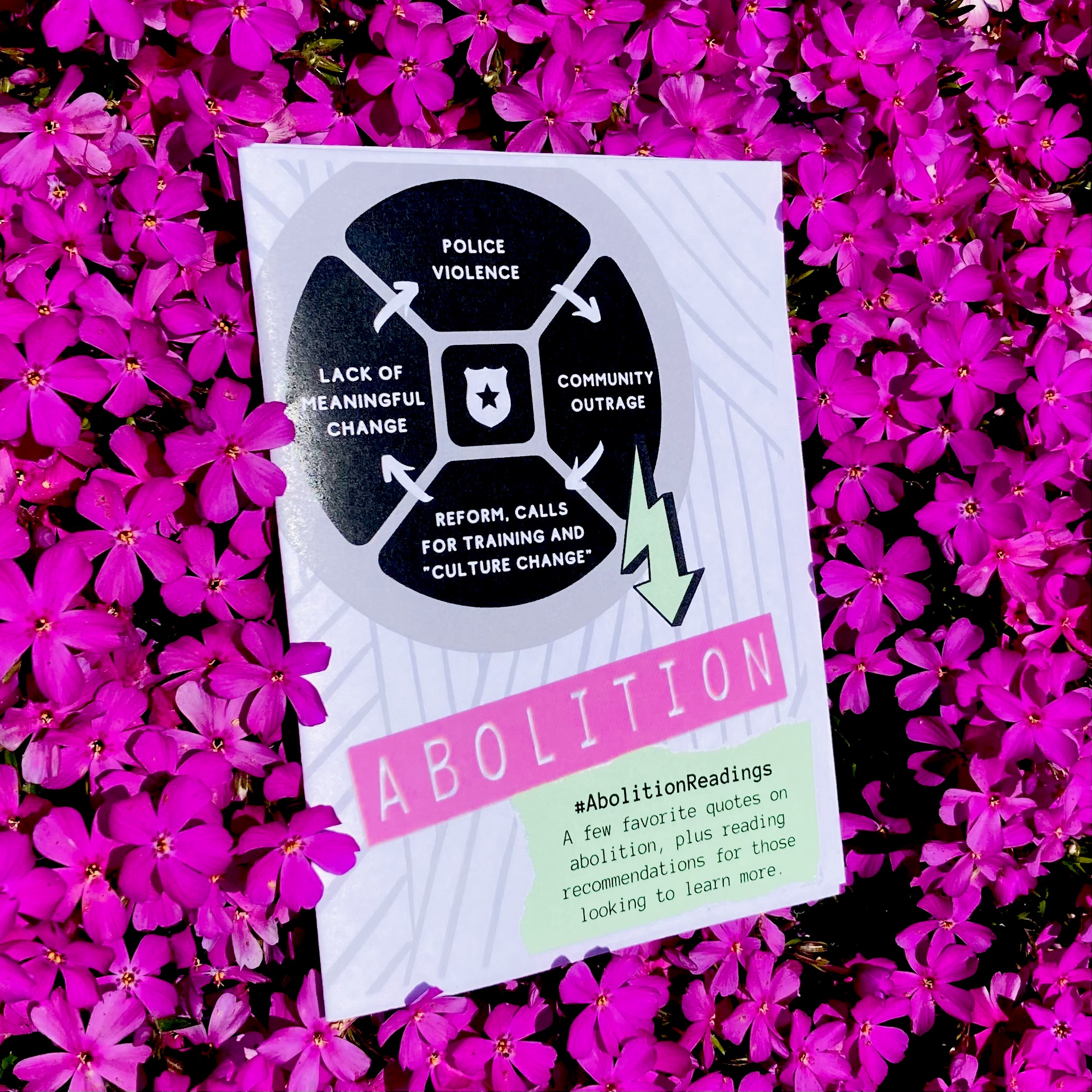 This is the landing page for a social media project re-sharing some of the most powerful, useful writing on abolition—especially (though not exclusively) from the latter half of 2020. We already maintain a pretty robust “Resources” page on this site, and that page is full of book recommendations, activist toolkits, articles, and much more. This page is a more focused version of that: 25 specific readings we’d recommend for people who want to learn more about abolition. We’re also sharing them on social media using the hashtag #AbolitionReadings.

Here is the text of the pullquotes from the #AbolitionReadings series of posts:

“Just as we hear calls today for more humane policing, people then called for a more humane slavery. Abolition — of slavery, the death penalty, prisons, police — has always been a controversial political demand, not least because it calls attention to the fact that simply reforming specific institutions without changing their foundational elements may reproduce and perhaps even exacerbate the problems reform seeks to solve.” —Angela Y. Davis: Why Arguments Against Abolition Inevitably Fail (Medium’s #AbolitionForthePeople Series, October 6, 2020)

“The surest way of reducing police violence is to reduce the power of the police, by cutting budgets and the number of officers… But don’t get me wrong. We are not abandoning our communities to violence. We don’t want to just close police departments. We want to make them obsolete. We should redirect the billions that now go to police departments toward providing health care, housing, education and good jobs. If we did this, there would be less need for the police in the first place.” —Mariame Kaba: Yes, We Mean Literally Abolish the Police (The New York Times, June 12, 2020)

“The spectacle of violence is only the tip of the spear. It’s only the most acute manifestation of 150 years of racist state violence, punishing the poor, and failed reform. More training workshops for cops or another Black police chief is not going to fix this. Cops who kneel with protesters and then stand up and tear gas them is not going to fix this. What would it look like to try something else, to defund and dismantle police departments, and yes, to abolish the police? What would it look like to abolish prisons?” —Ruth Wilson Gilmore Makes the Case for Abolition (Interviewed at the Intercept, June 10, 2020)

“The coronavirus pandemic revealed, and the Floyd uprising has confirmed, that big, structural interventions are the bare minimum for making Black lives matter in the United States. The call to defund the police captures both the enormity of the crisis and the need for an enormous response. It draws attention to the continuity of police funding even as other parts of the public sector have been depleted.” —Keeanga-Yamahtta Taylor: We Should Still Defund the Police (The New Yorker, August 14, 2020)

“So if we abolish the police, what’s the alternative? Who do we call? As someone who grew up calling 911, I also shared this concern. I learned this: Just because I did not know an answer didn’t mean that one did not exist… Rather than thinking of abolition as just getting rid of police, I think about it as an invitation to create and support lots of different answers to the problem of harm in society, and, most exciting, as an opportunity to reduce and eliminate harm in the first place.” —Derecka Purnell: How I Became a Police Abolitionist (The Atlantic, July 6, 2020)

“If we wanted to protect rape victims and serve survivors, our systems would attack harm and its causes at the root. It would center its solutions in harm reduction, in transformative justice, in restorative processes of accountability, and move away from punitive solutions that do nothing to stop assault from happening.” —Camonghne Felix: Aching for Abolition: As a survivor of sexual violence, I know prison isn’t the answer (The Cut, October 1, 2020)

“We’re abolishing the police, not abolishing ‘help.’ Abolitionists want everyone to be safe. We’re just acknowledging that there are other ways to think about safety than armed paramilitary forces with a proven track record of racism, brutality, and a focus on responding to harm after it’s happened rather than de-escalating or preventing it in the first place. We need to explore those ‘other ways,’ lift up current practices for building safe communities without police, and innovate some new ones too.” —From MPD150’s What Are We Talking About When We Talk About a Police-Free Future? (Included in the “Enough Is Enough” Report and Toolkit)

“Police abolition is not about snapping our fingers and instantly defunding every department in the world, leaving communities without strategies to create and sustain safety. Instead, we must replace the police with systems that support real wellness and safety. To do so, we focus on reallocating resources from policing toward human needs like housing, child care, and health care.” —From Police Abolition 101: Messages When Facing Doubts (Project NIA and Interrupting Criminalization, expanding on MPD150’s original FAQ zine)

“Justice is not revenge. Rather, justice is a proactive commitment to providing each person with the material and social conditions in which they can both survive and thrive as a healthy and self-actualized human being… The police have never been capable—historically, presently, either in statement of purpose or in action—and, I believe, will never be capable of fostering such conditions.” —Mychal Denzel Smith: Incremental Change Is a Moral Failure (The Atlantic, September 2020)

“Turning away from systems of policing and punishment doesn’t mean turning away from accountability. It just means we stop setting the value of a life by how much time another person does in a cage for violating or taking it – particularly when the criminal punishment system has consistently made clear whose lives it will value, and whose lives it will cage.” —Mariame Kaba & Andrea J. Ritchie: We Want More Justice For Breonna Taylor Than The System That Killed Her Can Deliver (Essence, July 16, 2020)

“Community policing normalizes the idea that police should be ‘in charge’ of programs that might ordinarily be outside their wheelhouse. Placing cops in charge of other programs and services, such as mental health or homeless services, means that departments can justify the placement of police pretty much anywhere.” —Maya Schenwar and Victoria Law: The Problem With “Community Policing” (Slate, July 30, 2020)

“Instead of struggling to take over and redirect the master’s tool, we call for investing the resources now poured into policing directly into community initiatives whose core missions are about helping, healing, and sustaining people, not controlling them. Instead of a one-size-fits-all blueprint, abolition allows communities to imagine and build a world that centers community needs, taking into account local cultural traditions and existing programs and resources.” —Woods Ervin, Ricardo Levins Morales, Zola Richardson, and Jonathan Stegall: The Fantasy of Community Control of the Police (The Forge, February 4, 2021)

“America does not flood the dorms of Harvard with cops because they are areas of ‘known drug activity.’ It does not station armed officers in the cubicles of Wells Fargo. The white parents of Westchester do not generally have to subject their teenagers to The Talk. White safety, itself built on a foundation of enslavement and segregation, is ensured through familial wealth, home ownership, well-funded public schools, stable employment, and health care. Black safety is ensured by ‘zero tolerance policing’ and ‘stop and frisk.’ White safety is cancer prevention. Black safety is all-day chemotherapy.”

“The promise of abolition is the promise of democracy itself—one long denied Black people: the promise inherent in constructing an order of public safety originating in the needs and desires of a community, and not those who have, for so long, exploited them.” —Josie Duffy Rice: The Abolition Movement (The Atlantic, August 25, 2020)